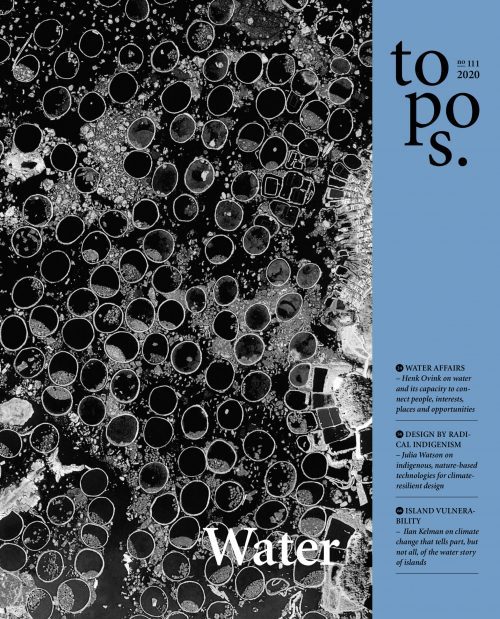 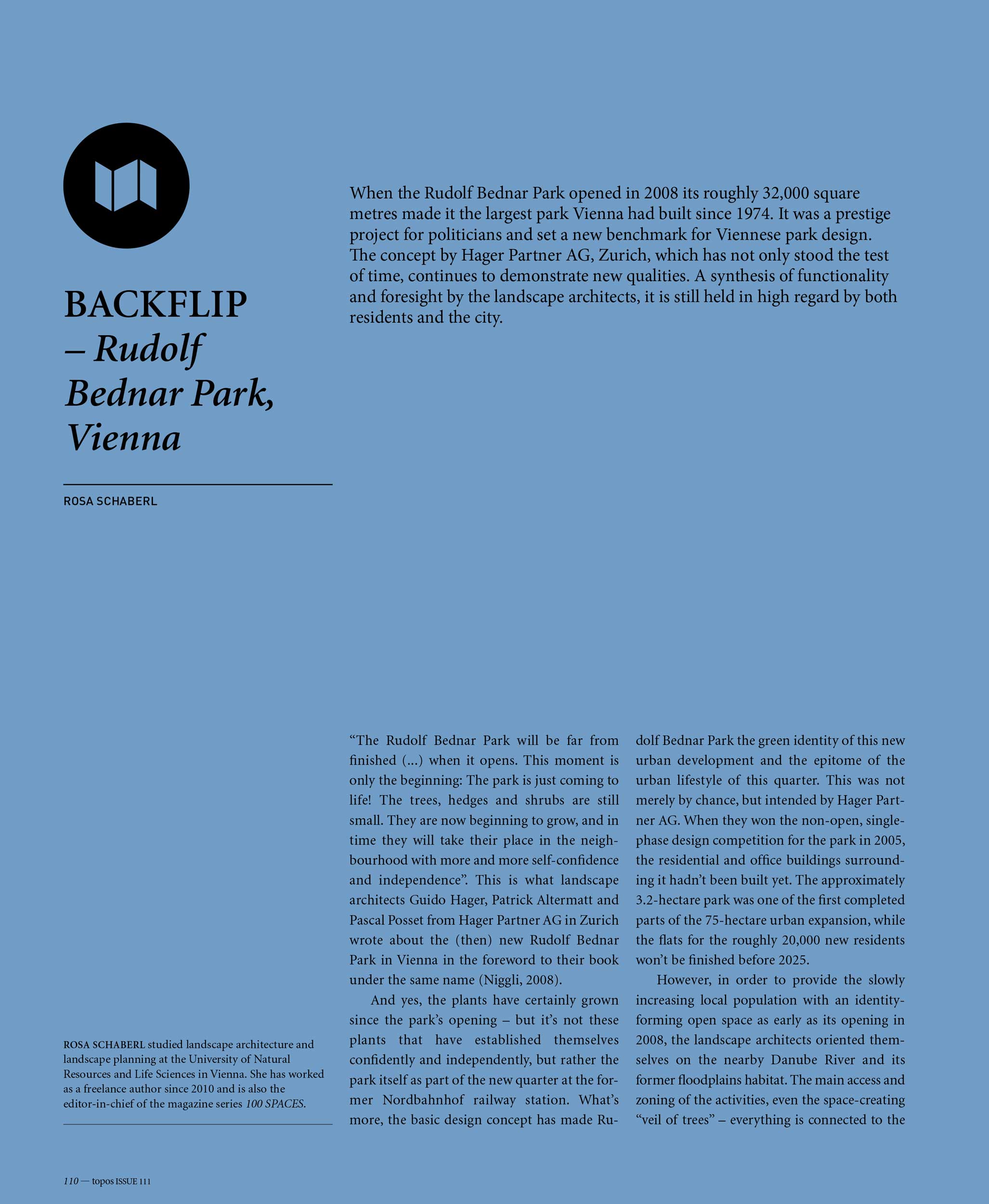 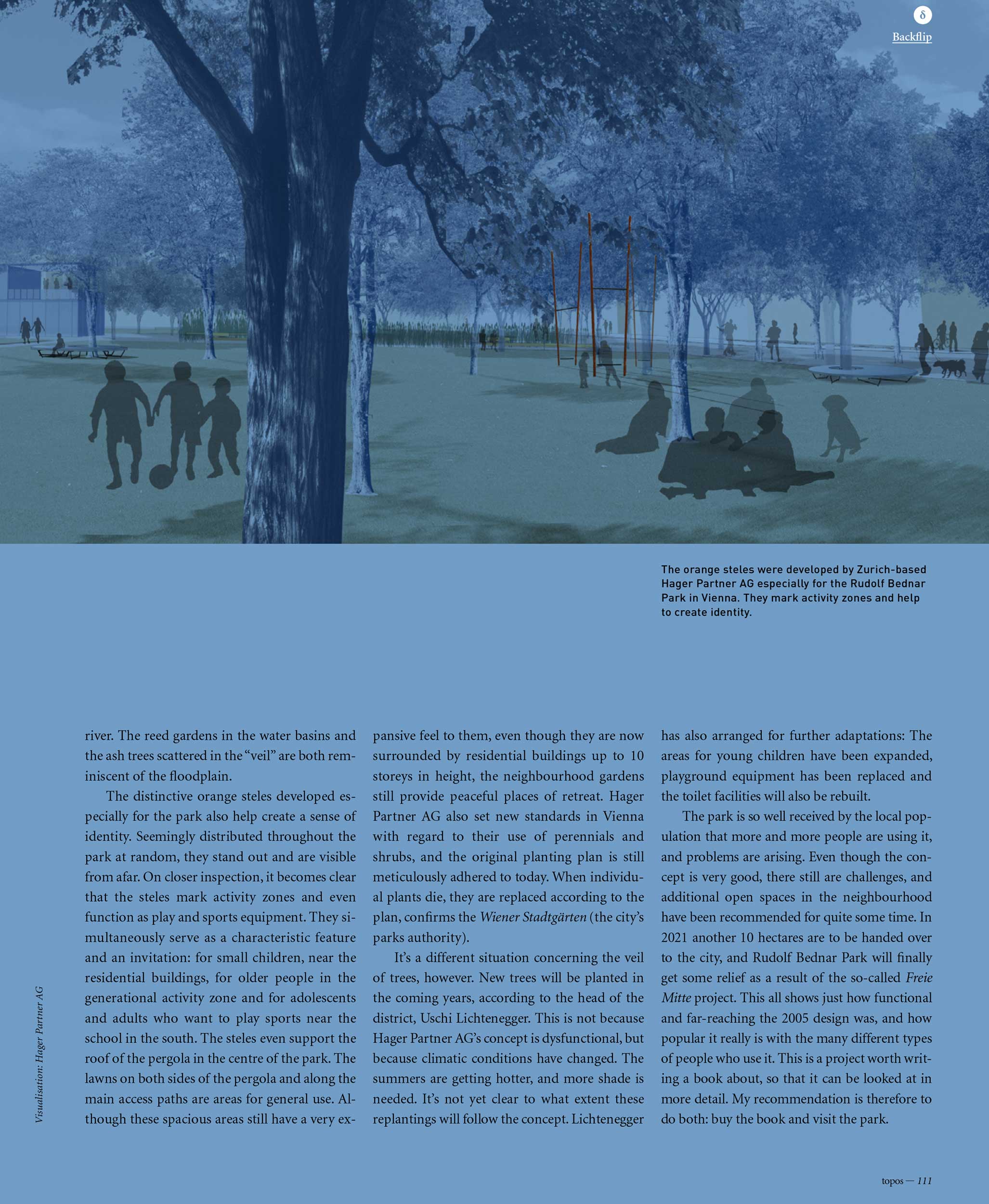 When the Rudolf Bednar Park opened in 2008 its roughly 32,000 square metres made it the largest park Vienna had built since 1974. It was a prestige project for politicians and set a new benchmark for Viennese park design. The concept by Hager Partner AG, Zurich, which has not only stood the test of time, continues to demonstrate new qualities. A synthesis of functionality and foresight by the landscape architects, it is still held in high regard by both residents and the city.

“The Rudolf Bednar Park will be far from finished (…) when it opens. This moment is only the beginning: The park is just coming to life! The trees, hedges and shrubs are still small. They are now beginning to grow, and in time they will take their place in the neigh-bourhood with more and more self-confidence and independence”. This is what landscape architects Guido Hager, Patrick Altermatt and Pascal Posset from Hager Partner AG in Zurich wrote about the (then) new Rudolf Bednar Park in Vienna in the foreword to their book under the same name (Niggli, 2008). And yes, the plants have certainly grown since the park’s opening – but it’s not these plants that have established themselves confidently and independently, but rather the park itself as part of the new quarter at the for-mer Nordbahnhof railway station. What’s more, the basic design concept has made Rudolf Bednar Park the green identity of this new urban development and the epitome of the urban lifestyle of this quarter. This was not merely by chance, but intended by Hager Part-ner AG.

When they won the non-open, single-phase design competition for the park in 2005, the residential and office buildings surround-ing it hadn’t been built yet. The approximately 3.2-hectare park was one of the first completed parts of the 75-hectare urban expansion, while the flats for the roughly 20,000 new residents won’t be finished before 2025.

However, in order to provide the slowly increasing local population with an identityforming open space as early as its opening in 2008, the landscape architects oriented themselves on the nearby Danube River and its former floodplains habitat. The main access and zoning of the activities, even the space-creating “veil of trees” – everything is connected to the river. The reed gardens in the water basins and the ash trees scattered in the “veil” are both reminiscent of the floodplain.

The distinctive orange steles developed especially for the park also help create a sense of identity. Seemingly distributed throughout the park at random, they stand out and are visible from afar. On closer inspection, it becomes clear that the steles mark activity zones and even function as play and sports equipment. They simultaneously serve as a characteristic feature and an invitation: for small children, near the residential buildings, for older people in the generational activity zone and for adolescents and adults who want to play sports near the school in the south. The steles even support the roof of the pergola in the centre of the park. The lawns on both sides of the pergola and along the main access paths are areas for general use.

Mehr Informationen zu Cookies erhalten Sie auf WIKIPEDIA.
Necessary immer aktiv
Necessary cookies are absolutely essential for the website to function properly. These cookies ensure basic functionalities and security features of the website, anonymously.
Functional
Functional cookies help to perform certain functionalities like sharing the content of the website on social media platforms, collect feedbacks, and other third-party features.
Performance
Performance cookies are used to understand and analyze the key performance indexes of the website which helps in delivering a better user experience for the visitors.
Analytics
Analytical cookies are used to understand how visitors interact with the website. These cookies help provide information on metrics the number of visitors, bounce rate, traffic source, etc.
Advertisement
Advertisement cookies are used to provide visitors with relevant ads and marketing campaigns. These cookies track visitors across websites and collect information to provide customized ads.
Others
Other uncategorized cookies are those that are being analyzed and have not been classified into a category as yet.
SPEICHERN & AKZEPTIEREN
Zur mobilen Version gehen